Asta is committed to ensuring the best and brightest people are attracted to our industry and encouraged to build a rewarding career in insurance. That’s why every summer we offer internships to young people who are studying for their ‘A’ levels or are in further education, and give them the opportunity to gain invaluable knowledge and experience. We sat down with one of our Summer ‘21 interns to find out more about them, what they’d been doing, and how much they’d learnt during their time with us. 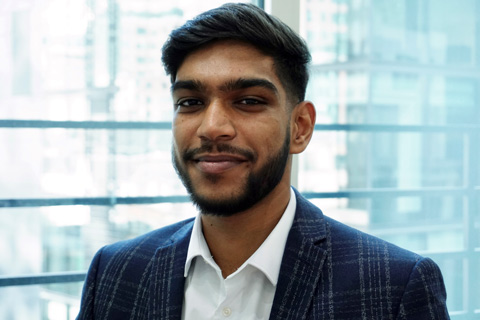 Q. Where do you go to university and what do you study?

ZU. I study banking and finance at the University of Leicester. When I was at school I wanted to be a Dentist but while my GCSE results were good, they weren’t good enough for that. I had older cousins who were studying Economics at A-level, so I opted for that as one my subjects and that turned out to be my favourite. I’m not sure banking as a career is for me but I hope that if I get a 2:1 I’ll be able to find the right career in any industry. My time at university has been the best of my life, despite the disruption from Covid towards the end of my first year. On-line pre-recorded lectures aren’t what anyone wants, and it was hard to stay motivated. Hopefully we’ll be back on campus when we return - I’m really looking forward to that and graduating next year.

Q. What attracted you to the Asta internship programme?

ZU.I’d applied for a few internships, but I was let down by a couple of the big consultancy firms who took six months after the final interview to decline my application. That made me realise I didn’t want to work at a big company and when my cousin told me about the opportunities at Asta that were advertised on the SEO London website I was very interested. When I researched the Asta website I liked the sound of their culture and values even if I was less sure about what they did as a business. There were two roles available, and I initially applied for a role in the Business Change team which I didn’t get, but I had good feedback from my interview, and I was encouraged to apply for another role in Internal Audit. I hadn’t applied for any internal audit roles before as I didn’t understand what they did and to be honest the word “audit” put me off. I’m glad I applied though, as gaining an understanding of the importance of internal audit in the business has been a very good experience.

Q. What type of work have you done during your internship?

ZU.In my first week, I attended a “Lines of Defence workshop” and that’s when I really began to understand what Internal Audit did and the important role it played in protecting the business against risks that could affect its operation and reputation.

The first week was information overload and I wondered whether it was going to be like this every week. I then started attending meetings with Syndicate-in-a-Box clients and it was good to put all of that information into proactive use and to engage with such a wide variety of people.

That gave me a good introduction before working on a project called “Time at Work” project. This involved interviewing every senior manager to assess the timesheet process and look at ways in which it could be improved. I had exposure to all parts of the business, attending meetings and hearing about what each function did and the internal controls they had to manage their own risks. Having exposure to the senior managers isn’t what I expected at my age or during an internship and being able to talk to them about their own careers has been invaluable.

As the last line of defence, internal audit’s job is to independently evaluate the effectiveness of governance and risk management and to give assurance to Asta’s senior management, Lloyd’s, regulators and external auditors that appropriate controls and processes are in place.

Q. What’s the most interesting or surprising thing you have learnt so far at Asta?

ZU.I didn’t know anything about the Lloyd’s market so there was a lot to learn, but by my third week I’d started to put everything together and I understood much more the central role Lloyd’s played in controlling the market. We went to visit the Lloyd’s building and it was interesting to see how many of the traditions they had retained - the artwork, waiters and calligraphy. I was a bit surprised at the lack of diversity, but it's good to know that Lloyd's recognises that ethnic minority representation in the market is an issue, and they are taking steps to improve this as part of their Future Culture at Lloyd's programme.

Q. What’s the biggest challenge you have faced during your internship?

ZU.I didn’t know anything about insurance when I joined so a lot of the language and terminology being used in meetings took time to fully understand. Following discussions in meetings was the biggest challenge because if you don’t understand something that’s when you start to lose interest. I made a point of writing down questions - asking the team after meetings about the importance of what we were doing and why. Before meetings, I also ask for details of what will be discussed and the context. Being prepared to question further keeps you engaged and helps you increase the depth and breadth of your knowledge.

Starting a new role and having to work from home due to the pandemic has also been hard. We’re the first generation to do that so it was a new experience for everyone. As we’ve started to return to the office it’s been much easier to ask questions and pick up information “in the moment” so you can quickly continue with whatever you’re working on instead of waiting for a Teams call to discuss something.

Q. How would you describe the culture at Asta?

ZU.When I applied I was interested to find out from the person interviewing me what they thought about Asta’s culture. They said it was very collaborative and everyone gets on with each other and that’s what I’ve seen – everyone is so friendly. When I joined I discovered that one of my team colleagues sits on the Culture Committee and he talked a lot about its role in promoting inclusion within the business, so I feel that everything I read on the website is genuine and put into practice inside the business.

I also really liked Asta’s charity policy – they don’t just send a single donation to one charity but smaller donations to charities that are selected by staff, and which are trying to change things in their local community. That’s one of the reasons why I wanted to work for Asta.

I’ve thoroughly enjoyed the experience at Asta, and I feel like it’s a place where everyone has an equal opportunity to start and develop their career. Having exposure to everyone has been incredible and I’m not just seen as “the intern” that no-one knows what to do with - everyone takes the time to talk to you and there is a high level of mutual respect. I even got to present some of our work to the Exec and Senior management teams which just goes to show how much interns are trusted and included in projects that make a positive difference to the business.

Q. Any advice for students considering an internship in insurance?

ZU.Just keep asking questions because that’s the only way you’re going to learn. And don’t just ask one question – ask more to go deeper into the detail to understand why things are important so that when you put it into practice you’ll understand the context. Don’t get too phased by all the jargon and acronyms because not everyone knows what they all mean and they’re constantly changing anyway! Before you apply keep an open mind and research what the role is - like I say, internal audit I never considered so take time to take a look at the role more closely.

Q. What are your interests outside studying and working at Asta?

ZU.All sport! I try and find time for badminton and tennis in between playing a lot of football - when we were on campus there was a university five-a-side league every week. And like a good Surrey boy, I’m a Liverpool fan! After watching a Netflix documentary called Drive to survive I got back into F1 after losing interest when it moved to paid TV when I was younger. I hadn’t realised just how technical F1 is and how much goes into a race.

Q. Where do you see yourself in 5 years time?

ZU. Before Asta, I had no clue at all what I was going to do. Now, I’d like to do something in the area of risk management, but I don’t want to limit myself to one thing just yet - I want to experience other companies and industries to find out what is right for me. I see myself working in the City and I love commuting and the buzz of being around other professionals.